Too Cold to Chirp? 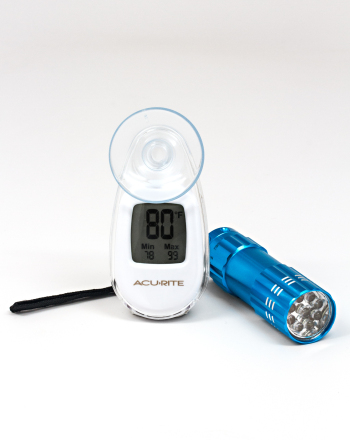 This projects looks for a correlation between temperature and the intensity of cricket chirping.

The goal is to have the student formulate and test a hypothesis about the relationship between temperature and cricket metabolism.

Choruses of cicadas, katydids, and crickets are a familiar sound during the warmer months of the year. Cicadas sing in late afternoon, while crickets start chirping at dusk. Late at night, katydids take up their songs, which continue until the early hours of the morning. The songs are all used for communication.

Male crickets and katydids make sounds with their wings. The singing of cicadas comes from the vibrating membranes on the sides of the abdomens of males.

Insects are cold-blooded, which means their metabolisms increase as temperature goes up. Crickets need a certain amount of energy to rub their wings together to produce chirping. At higher temperatures, the energy threshold is easily reached. At very low temperatures, less energy is available and the rate of chirping is slower.

Cricket chirps are produced when a cricket contracts the muscles in its wings, creating wing beats. Each wing beat produces many small vibrations. The vibrations determine the rate (number per unit time) and sound intensity (energy content) of the chirps. (Sound intensity is a quantitative measure of sound volume.)

In 1897, an American physicist by the name of Amos Dolbear published a paper in which he proposed a correlation between temperature and the rate at which the Snowy Tree Cricket chirps. He did not consider sound intensity.

Sound waves are introduced into the air by vibrations. The amount of energy that the cricket’s sound wave carries depends on the amplitudes of the vibrations produced by the wing beats. If more energy is put into rubbing the wings together, the vibrations increase in amplitude and the chirp acquires a higher sound intensity.

The scale that is used to express sound intensity is based on powers of 10. Known as the decibel scale, it assigns a level of 0 decibels to a sound intensity of 1x10-12 W/m2. A sound that is 10 times more intense is assigned a value of 10 dB, and a sound 100 times as intense is given a value of 20 dB. This means that if a sound is 10x times more intense than another sound, it has a decibel reading that is 10x higher than the less intense sound.

Materials can be found on the Internet.

Convert the sound intensities in decibels to units of W/m2.

Too Cold To Snow?
Science project
Too Cold To Snow?
...What conditions are needed in order for snow to fall? Is there such a thing as being too cold to snow?...
3rd grade
Science project
Animal Word Search: Cold-Blooded!
Worksheet
Animal Word Search: Cold-Blooded!
Focusing on reptiles, not only does this word search expand kids' animal vocabulary, it teaches them a little about cold-blooded animals, too.
3rd grade
Reading & Writing
Worksheet
Hot or Cold?
Worksheet
Hot or Cold?
Hot or cold? Children practice classifying nine items by cutting them out and placing them in the correct box.
preschool
Science
Worksheet
Chirping Crickets
Science project
Chirping Crickets
How many times do crickets chirp each minute?
Science project
Cold Desert Plants
Science project
Cold Desert Plants
Check out this cool science fair project idea that models the behavior of the cold desert plants: xerophytes and halophytes.
3rd grade
Science project
Two, Too, or To?
Lesson plan
Two, Too, or To?
By creating an interactive notebook template, kids will help themselves remember the correct ways to use the commonly confused words to, too, two, there, and their.
4th grade
Reading & Writing
Lesson plan
Cold Drinks Bar Graph
Worksheet
Cold Drinks Bar Graph
Use an easy bar graph to find out what your classmates' favorite cold drinks are. Kids will get the chance to analyze data and color in the bar graph.
2nd grade
Math
Worksheet
Animal Crossword: Cold-Blooded Animals
Worksheet
Animal Crossword: Cold-Blooded Animals
Help your child figure this out with this cold-blooded animal crossword puzzle worksheet.
5th grade
Reading & Writing
Worksheet
Does Hot Water Freeze Faster Than Cold Water?
Science project
Does Hot Water Freeze Faster Than Cold Water?
Most people assume that cold water freezes more quickly, but could that be false? Does hot water freeze faster than cold water? Let's find out!
3rd grade
Science project
The Science Behind a Cold Pack
Science project
The Science Behind a Cold Pack
How do cold packs work? Explore endothermic reactions by comparing the temperature change that results from various chemicals added to water to find out!
Middle school
Science project
Cold-Blooded Animals: Find the Word!
Worksheet
Cold-Blooded Animals: Find the Word!
Discuss with your child what it means to be cold-blooded.
4th grade
Science
Worksheet
Too Much Food!
Worksheet
Too Much Food!
The daring diners in this worksheet have taken too much food for themselves, and it's up to you to help them out.
1st grade
Math
Worksheet
We enable strictly necessary cookies to give you the best possible experience on Education.com.Cookie policy