Can Hydrogel Crystals be used as a Drug Delivery System? 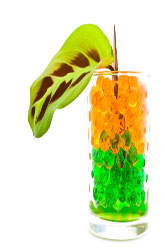 Investigator should not ingest the crystals or drink the liquids associated with the activity. The crystals used in the project are extremely slippery when spilled. Never flush or pour these crystals down the drain, crystal swelling could possibly clog drainpipes. Leave to brew overnight. Also, care should be exercised when handling the hot water and the hot tea brew that will be used in this project.

The supervising adult should discuss the warnings and safety information with the child or children before commencing the activity.

The materials required for this project are readily available and inexpensive.

1½ hours to complete the activity once the materials are secured and setup. Also between 1 and 2 hours to prepare the Tri-fold board display.

A drug delivery system is a medium or carrier of drugs and medicines to where they are needed in a patient's body. Medical researchers are currently exploring if it is possible to use hydrogel crystals as possible delivery systems. The research aspect of this science fair project is to determine which of two chemical agents can be used to release the drug (tea) from hydrogel crystals.

This science fair project focuses on a special kind of polymer called a hydrogel superabsorbent crystal which absorbs water, swelling to many times its original size. In addition to water these crystals will be tested to see if they will absorb a strong tea solution, if they are able to absorb the tea the crystals will be treated with both a salt and sugar solution to see which of the two will allow the crystals to retain the tea and which will cause the tea to be released.
These crystals act as a model of a drug delivery system. The drug is first loaded onto the carrier and then it is released at a specific time and location. The tea represents the drug and the hydrogel crystal is the carrier. The salt and sugar solutions represent possible releasing agents that will be investigated in this project. From the observations made a dataset will be produced.

Hydrogel superabsorbent crystals, several tea bags, a bag of 8 oz clear plastic cups, table sugar, table salt, sieve (the plastic ones used for sifting flour), distilled water, plastic table spoons, tea pot, measuring cup, and paper towels. With the possible exception of the crystals, all the other items can be purchased from the local supermarket and garden supply store. Also, a Tri-fold cardboard display board can be purchased from an art & crafts supply store.

The hydrogel crystals can be purchased either locally from a garden supply store or online. Fortunately the price has been coming down. Science in A Bag charges $10 plus free shipping for a pack of these crystals. They also may be ordered from www.teacherssource.com, or Nasco Science.

A hydrogel crystal (sometimes called a "Disappearing crystal," "Water Crystal," "Superabsorbent gel," etc) is a long chain of molecules bonded together to form a superabsorbent polymer, that does not dissolve, but forms a gel when placed in water and is often used in garden, landscape, and farming applications as a way of retaining moisture. Instead of dissolving, these crystals absorb water, swelling to many times their original size. The crystal is made up almost entirely of water.

The hydrogels that will be used in this project are sensitive to salt concentration but not to sugar. The hydrogel polymer is in equilibrium with the water around it, but that equilibrium can be disturbed. If the ionic concentration of the solution is increased by adding salt the positive ions attach themselves to the negative sites on the polymer, effectively neutralizing the charges which causes the hydrogel to shrink in on itself releasing water and any other substance that it has absorbed, because the sugar is covalent in structural bonding it does not change the hydrogel polymer's equilibrium.

As the young investigator will discover it is possible to use hydrogels as a drug delivery system with tea representing the drug and the hydrogel the carrier. When salt water is added to the crystals, they begin to shrink and release the encapsulated tea. This will not happen when the crystals are placed in a sugar water solution.  From this observation the young investigator will be able to conclude that if hydrogel crystals are used as drug carriers a salt solution can be used as an agent to release the drug. Digital photos can be taken during the experimenting process and/or images of crystals submerged in water can be downloaded from the Science in a Bag website for free and without copyright infringement issues.

Raw Data
Interpretation of Data
Note: The crystals in the sugar solution have the same volume as the ones in the distilled water. If they are left for up to 15 minutes the tea will not be released. (After this time, the water in the crystals will be in equilibrium with the water in the cup and some tea may begin to leak out.)

The material in the book is comprehensive, adult-level in scope and sequence however; the young investigator and his or her parents (teachers) can use this book as a general reference resource.

NOTE: The Internet is dynamic; websites cited are subject to change without warning or notice!
Disclaimer and Safety Precautions