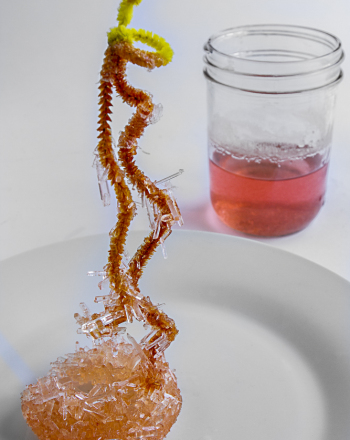 When deciding on an appropriate theme for our science fair project, we had to consider a project that was stimulating to my 16 year old autistic patient and equally as fulfilling to me, his adult Personal Care Assistant. Crystal formation is a fascinating subject and can be easily observed by a younger, developmentally delayed student. Thus, giving us our Virtual Science Fair Project theme, as we appropriately named, ‘Crystal Wonderland’.

The project was easily prepared, conducted and observed by my patient. The report research and preparation was not completed by my patient, as he is incapable of such tasks. However, he was involved to the best of his capabilities.

Crystal formation is intriguing! To demonstrate crystal formation, we chose salt. When salt, sodium (Na) and chlorine (Cl), dissolved in water the molecules separated. This caused the water to appear cloudy. We sculptured a pipe cleaner to fit inside of the jar with the cloudy solution. The sculpture was secured by string tied to a pencil. We set the experiment aside and prepared for observation over the course of 3 days. After several days, the water began to evaporate. As the water evaporated, the molecules reattached. The bonding of molecules formed crystals. We saw the beginning formation of crystals almost immediately! Each crystal was unique!

Our project was lots of fun! We hope you find our project just as entertaining and enlightening as we did!

This project theme was selected to observe the concept of dissolving substances and crystal formation.

This project was conducted to observe dissolved solutions and the formation of crystals. Crystals are groups of organized molecules that uniquely take on their own shape. In our project, salt was chosen as the dissolved substance and the representation of crystal formation. Salt is made up of two atoms – sodium (Na) and Chlorine (Cl).

The salt evaporated when mixed with hot water and stirred. Over several days, the water/salt solution evaporated at a slow pace. As the water evaporated, the salt molecules began to reattach after being dissolved, this formed salt crystals. The salt crystals were different shapes in size and length. They were clear in color and had shapes that resembled multiple groupings.

Upon conducting the experiment, the following questions were asked:

To conduct the experiment, the following procedure was followed:

The experimental procedure resulted in crystals forming against the sculptured pipe cleaner and at the bottom of the glass jar. During the experiment observations were made for three days. 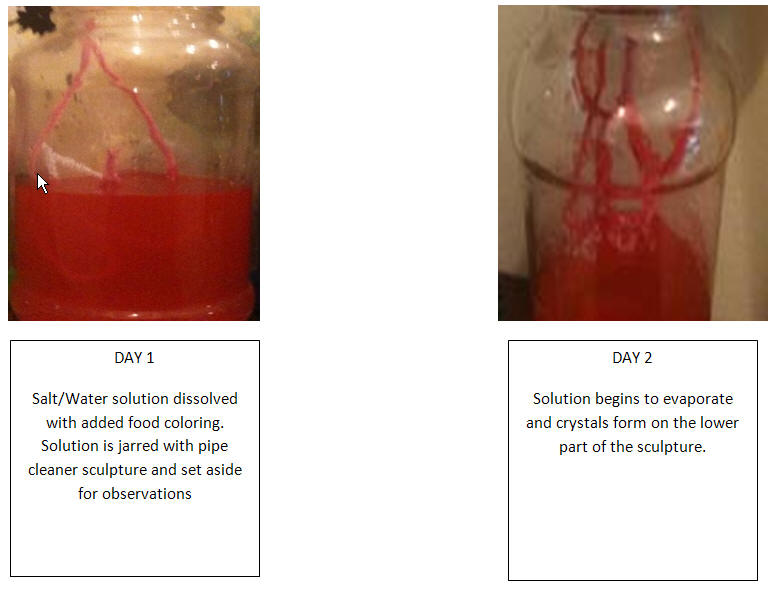 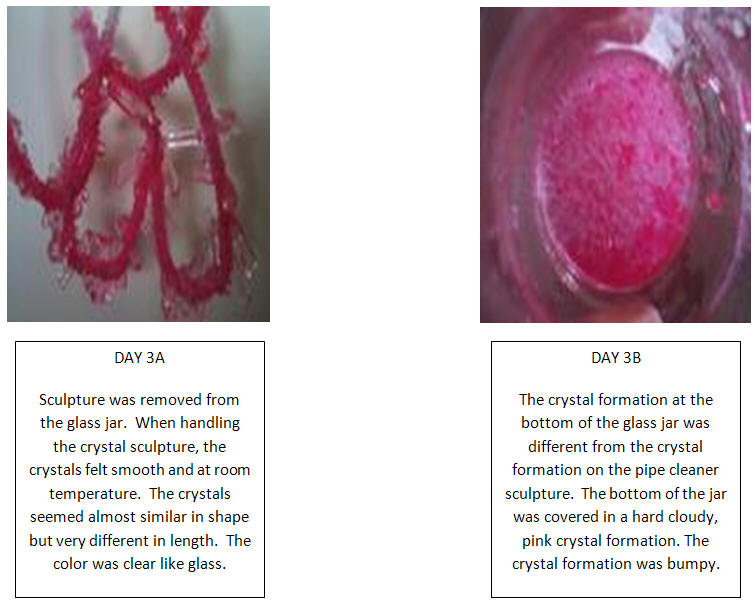 The experiment results were successful. A crystal formation was desired and achieved. Crystals formed on the sculptured pipe cleaner and at the bottom of the glass jar.

This experiment concludes with the knowledge of crystal formation. After the salt dissolved in water, the molecules were able to reattach during the evaporation process. When the molecules reattached, they solidified again, but into the new form – a crystal.

If we were to further this experiment, the following questions could be asked:

Crystal Suncatcher
Activity
Crystal Suncatcher
This Valentine's Day, pair up science and crafting with this simple crystal formation project that's sure to bring a little love into your home.
3rd grade
Arts & crafts
Activity
Alice in Wonderland Coloring Page
Worksheet
Alice in Wonderland Coloring Page
This Alice in Wonderland coloring page will delight your little fan and entice her to add color to bring this scene to life!
2nd grade
Worksheet
Make Your Own Crystal Art
Science project
Make Your Own Crystal Art
This science fair project idea teaches to understand and explore the concepts of crystal formation and dissolving substances.
1st grade
Science project
Start a Story: Peter Rabbit in Wonderland!
Worksheet
Start a Story: Peter Rabbit in Wonderland!
What if Peter Rabbit met the White Rabbit in Wonderland? Writing practice starts with a fun coloring page, what happens next is up to your child to write!
2nd grade
Reading & Writing
Worksheet
Storytelling: Identifying Elements in Wonderland
Lesson plan
Storytelling: Identifying Elements in Wonderland
In this lesson, your students will be taken into wonderland by reading familiar stories such as The Ugly Duckling. Your students will identify characters, setting, and main events in these stories.
1st grade
Reading & Writing
Lesson plan
A Writing Wonderland
Workbook
A Writing Wonderland
...A Writing Wonderland Kick-start your child’s imagination with the wonderful world of writing prompts....
1st grade
Reading & Writing
Workbook
Crystal Clear Contractions
Worksheet
Crystal Clear Contractions
Children practice creating contractions in this engaging grammar worksheet.
3rd grade
Reading & Writing
Worksheet
Multiplication Word Problems
Worksheet
Multiplication Word Problems
It's a multiplication wonderland! Review those times tables with these multiplication word problems.
3rd grade
Math
Worksheet
Similes: Clear as Crystal
Worksheet
Similes: Clear as Crystal
As quiet as a mouse or as quiet as a cucumber? Kids will learn the definition of a simile, then use pictures as clues to complete the similes.
3rd grade
Reading & Writing
Worksheet
Paint a Winter Window Wonderland
Activity
Paint a Winter Window Wonderland
Let the world be your canvas by transforming an ordinary household window into a snowy holiday scene.
2nd grade
Arts & crafts
Activity
Snowmen Search
Worksheet
Snowmen Search
Get in the holiday spirit by finding all of the 27 merry snowmen as they frolic around in this winter wonderland.
1st grade
Worksheet
Paper Chain Caterpillar Craft
Activity
Paper Chain Caterpillar Craft
Help your budding artist construct this paper chain caterpillar craft, inspired by the intelligent bug from "Alice in Wonderland."
1st grade
Arts & crafts
Activity
We enable strictly necessary cookies to give you the best possible experience on Education.com.Cookie policy