How to Demagnetize a Magnet

The first thing many kids do when they get home from school is open the refrigerator.  Is your refrigerator door covered with cards, photos and papers?  You probably already figured out that refrigerator magnets are attracted to the steel in the refrigerator door. Magnets are materials that attract iron (which is what steel is mostly made of), nickel and a couple other metals. A material is said to be magnetic if it acts like a magnet. The atoms within a magnet line up in groups with their north and south ends lined up with Earth’s magnetic pole. When many, many atoms are lined up in the same direction the material creates a magnetic field, which is the space around a magnet where the pull or push forces operate.

Now that we have discussed how your refrigerator magnets work, let’s investigate how to demagnetize a magnet. When we say that magnets can become demagnetized, we mean that they lose their ability to attract metals like iron.

How Can You Demagnetize a Magnet?

Your results will vary depending on the strength of the magnet you are creating magnets with, and how strong you make your nail magnets. Both of the hammered nails should have been noticeably less magnetic. The one you pointed east before hammering may have shown less magnetism than the one you pointed north. The nail you put in the oven should have lost some of its magnetism, while the one you put in the freezer will not have lost any strength at all.

Metals have lots of interesting properties! The reason the hammered nails showed less magnetism is because the hammering wrecked the orderly arrangement of atoms. The nail facing east may have been even more demagnetized than the one facing north because its atoms could not reorient themselves to the Earth’s magnetic poles. Remember—the earth itself is a giant magnet! 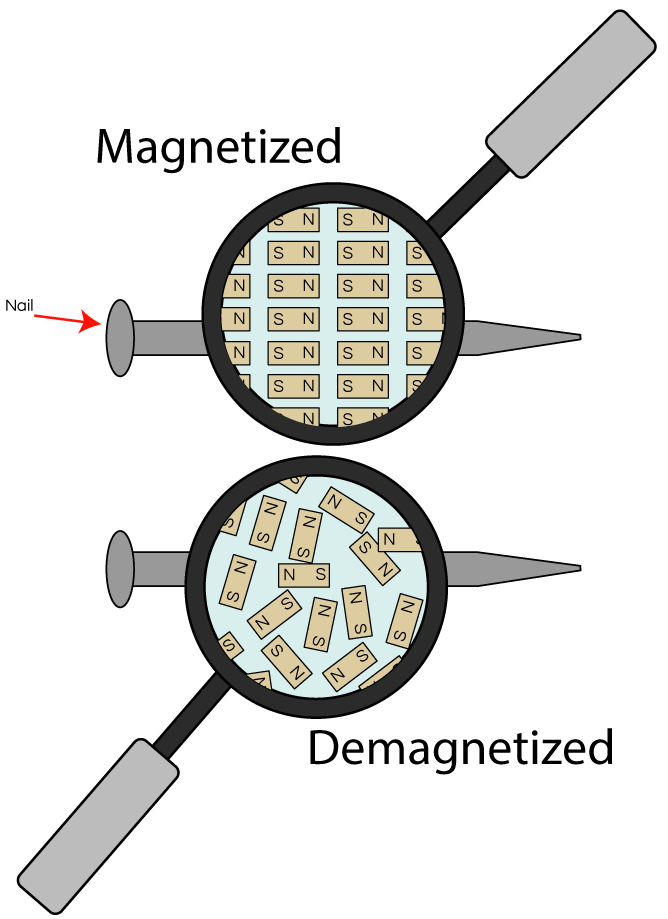 Heating the nail in the oven increased the kinetic energy of the nail’s iron atoms. That means the atoms were free to move around more, resulting in a messy arrangement after heating. Remember—iron atoms should all be facing the same direction to create a magnetic field. If a metal is heated to a high enough temperature, it reaches its Curie point, at which it loses all of its magnetism.  On the other hand, putting the nail in the freezer decreases the kinetic energy of its atoms, making sure the atoms stay put and the nail retains its magnetism.

Think of some other ways to demagnetize a nail. Maybe you could drop a magnetized nail several times (as refrigerator magnets sometimes do).  Perhaps you could place a nail in boiling water or let it rust a bit. Have fun, but be careful!