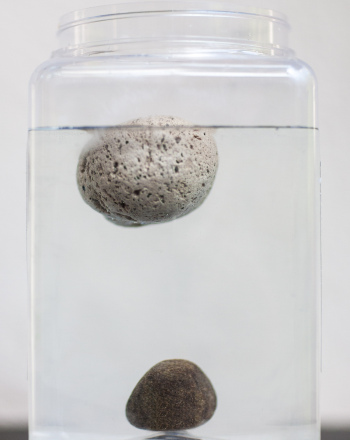 What floats in water? Wood, bread, apples...and very small rocks? Are there any rocks that can float?

Test different types of rocks to see if they can float in water.

The pumice will float for a while and then gradually sink. The granite will sink. Small pebbles will float momentarily and then sink. Sand will float, then move into the water, and gradually drift down to the bottom of the container.

If you’ve ever thrown a rock into a pond, you know that rocks usually sink. So why do some rocks float?

The reason that most rocks sink is because of the law of buoyancy, which is all about how things float or sink. This law is also called Archimedes’ Principle. Archimedes was a scientist who lived in ancient Greece.

Archimedes’ Principle says this: An object will float if it displaces as much water as it weighs. This sounds complicated, but what it means is that everything you put into water pushes the water away from itself. If the amount of water it pushes away is the same as the weight of the object, then the object will float. Light things float, but heavy things can also float if they’re designed to push enough water away. Think about big ships on the ocean!

So what does this have to do with your experiment? Granite and small pebbles generally sink to the bottom right away. When it comes to rocks, pumice is a bit of an oddball. Pumice has hundreds of tiny air bubbles in it. When it was made in a volcano, the volcano’s force pushed air into the rock. This makes pumice very light. It usually floats for a while, but then water gets into it and it starts to sink.

What about sand? If you use dry sand and a small container, the sand might be able to sit on the surface for a short amount of time. This is because of the surface tension of the water. Surface tension means that the water has a tough “skin” of water molecules that allow some things to float on the surface, like leaves. After a while, the sand gets wet and the water usually moves, and the sand will sink to the bottom.

Can you think of anything else that might float on water? Armed with your new knowledge, try to find out why it can!

Make Peace Rocks
Activity
Make Peace Rocks
Help your child learn how to stop and relax with handmade peace rocks.
4th grade
Activity
Sink or Float? #4
Worksheet
Sink or Float? #4
Introduce the basic concepts of sinking and floating with this fun worksheet. Your budding scientist will decide if these objects sink or float!
1st grade
Science
Worksheet
Balloon Coloring Page
Worksheet
Balloon Coloring Page
Add a splash of color before imagining the balloons floating high into the sky.
1st grade
Worksheet
Halloween Rock Painting
Activity
Halloween Rock Painting
...Encourage your child to sort the rocks by color or shape, make a pattern, and then have them count the rocks while lining them up....
kindergarten
Arts & crafts
Activity
Rock Painting: Retell a Story
Activity
Rock Painting: Retell a Story
...Give your child time to paint their rocks using the plan they created on the piece of paper. Allow the rocks time to dry....
kindergarten
Reading & Writing
Activity
Popsicle Stick Tic-Tac-Toe
Activity
Popsicle Stick Tic-Tac-Toe
...Have your child select two colors of paints for the rocks. Paint six rocks one color and six rocks a different color. Allow them to dry....
1st grade
Activity
How do Sedimentary Layers Form?
Science project
How do Sedimentary Layers Form?
...This project shows one way that sedimentary layers are formed as sediments (mud and silt, sand, pebbles and rocks, other materials) settle over time....
1st grade
Science project
Addition Facts Practice
Worksheet
Addition Facts Practice
...To complete it, your child will solve the addition problems floating in the stars....
1st grade
Math
Worksheet
Determining Relative Volume
Worksheet
Determining Relative Volume
...Can a wagon hold more rocks than a truck?...
1st grade
Math
Worksheet
Subtraction Using the Number Line
Worksheet
Subtraction Using the Number Line
...Sometimes, when we try to solve a math problem in our head, the numbers start floating around in different directions, making it difficult to solve the problem....
1st grade
Math
Worksheet
Bubble Math
Worksheet
Bubble Math
...Your child will solve the addition problems floating in the bubbles to complete this worksheet. first grade, 1st grade, math, worksheet, math worksheet, addition, addition...
1st grade
Math
Worksheet
Eureka! Volume and the Displacement of Water
Science project
Eureka! Volume and the Displacement of Water
...Drop 10 rocks into the second glass. What happens to the water? Keep dropping pennies and rocks into their respective glasses until the water overflows....
kindergarten
Science project
We enable strictly necessary cookies to give you the best possible experience on Education.com.Cookie policy