Do Gender and Age Affect Smiling? 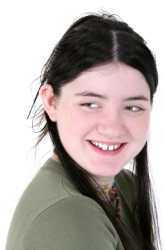 I did a project on smiling. I asked the question, Do Gender and Age Affect Smiling? I based my project on a news article about some research done on smiling that was found on the Internet. The results from the research project showed that in the higher grades girls smiled more than boys. I have always been interested in Behavioral Science involving the differences in gender and this article interested me. I wondered if the results for this project could be replicated.

Based on the news article and other articles that I read in my background reading I predicted that the higher in grades the girls would smile more.

To conduct this project I used the research project as a guideline. For data I gathered old yearbooks together and used the photographs in them as my test subjects. All the subjects had been asked to smile in front of a camera so it was controlled. I went through the photos and collected data on who was smiling or not, whether they were boys or girls, and what grade they were in. Then I analyzed the data by making graphs comparing the percentage of girls and boys smiling.

From the data I found that there was a difference in boys and girls. The higher the grade level, the bigger the difference between girls smiling and boys smiling. Boys seem to smile less as they get older. These are very similar results to what was found in the other research project.

As there has been very little research done on laughter and smiling, the results of my project, as well as other research projects, can help scientists continue to gather information on this subject. Now that I have completed this project, I look at yearbook pictures and my fellow students a little differently!

Does gender and age affect smiling?

Davis K. Dodd a senior lecturer in psychology in Arts and Science did a research project very similar to mine. He looked at 15,414 pictures of students in elementary and high schools and college. He found that in Kindergarten there is a slight difference with girls smiling 5 percent higher than boys. Gender roles have not yet been formed. Yet by eighth grade girls are smiling a lot more than boys.

Looking at several other articles on smiling and laughter I found out that there is a specific part of your brain that controls laughter. But we socially learn when it is appropriate to laugh and smile. Several of the articles talked about how laughter seems to be contagious and in some schools there have been laughing epidemics.

Hypothesis: From what I have found in my back ground reading I predict that as you get higher in the grades girls will smile more than boys.

A group of yearbooks from eighth to fifth grade

A series of year books through first grade to seventh grade

Paper and pencil to record

In order to do this investigation I had to decide how I was to rate a smile. I decided that a smile was when the corners of the mouth were turned up, but not in a forced way like in a grimace or sneer. Then I needed to see how consistently I could rate a smile. To check the accuracy I took a page of a yearbook, found the number of students on the page, and how many girls were smiling and how many boys were smiling. This was then repeated five times. The data was collected and put into a table and then the Standard Deviation and mean was calculated using Excel.

The margin of error was calculated. This was the difference between the mean minus the STDEV to the mean plus the STDEV.

Having found the margin of error, which showed how accurate I could rate the photographs, the yearbooks were gathered. These were grouped from 1st grade through seventh grade, excluding fourth following the same group of students. There was a second group that had random student groups from fifth through eighth. In all these yearbooks the photographs were rated for smiling or not smiling and the data was collected to show the number of boys smiling and girls smiling in each grade. Tables were put together. There were two tables, one representing the mix of students from grades fifth through eighth and one to represent the same kids, first through seventh. These tables are as follows:

In the beginning of this study I had to find out how accurate I could rate the photographs, my margin of error. It was found to be 9 %. For the results to be significance there had to be a 9 % difference between scores. Anything less than that could not be marked as a real difference.

These results were similar to the study we replicated and they support the hypothesis.

This study was to find out if there was a difference between boys and girls smiling and does it change over time? The hypothesis of the study was that as you get higher in the grades girls will smile more than the boys. I  found that by seventh and eighth grade girls are smiling more. This was what I was hoping to find.

Two groups were studied in this project. One was a random selection of yearbooks, grades fifth through eighth. The other was a sequence of yearbooks following the same group of students from first grade through eighth. Similar results were found in each group. I found that in the upper grades girls were smiling more than boys were. When looking at the top three grades, there seems to be a pattern. Just before the significant results in the top two grades there is no difference found between girls smiling and boys smiling. Is this because they are just hitting puberty and are not yet conscience of the opposite sex?

It is also interesting to note that with the same students who are from more recent yearbooks the grade before significant results is in fifth grade and with the mixed students from much older yearbooks it is in sixth grade. If this is when they hit puberty, this may support the fact that children today are beginning puberty at an earlier age?

In the sample of different students, a significant result was found in fifth grade, the girls were smiling more than the boys were. This was puzzling because it didn't follow the pattern that was in the sample of same students. If it were to follow this pattern it would have been expected to be insignificant with little difference between girls and boys smiling. It might have helped the understanding of this if there were results for this sample in first, second, third and fourth grade.

In the group where we looked at the same students there were no data for fourth grade. Would this have been significant or insignificant?

Overall this study has shown that age and gender has an effect on smiling. A future study should be done to fill in some of the missing data. The eighth grade yearbook for the same students was not available when this investigation was carried out but will be later in the year, data from that could also be collected.

As there has been little research done on smiling there are a lot of things to explore about it. One study that could branch off this one would be to see how blindness effects smiling. Another study that could be done would be to see if males perceive a smile differently than females. What roles does the stereotype man and woman have to do with the difference in smiling? This investigation has shown how complex the simple smile can be.

What's so funny and Why: Laughter and the Brain (http://faculty.washington.edu/chudler/laugh.html)