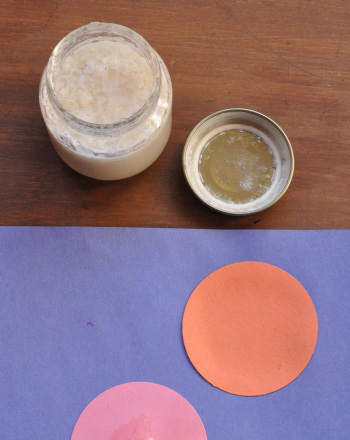 The goal of these experiments is to create glue by combinging curdled milk and baking soda.

Milk can be transformed into curds and whey by adding (1) rennet or (2) a mild acid such as acetic acid. Since vinegar is acetic acid, it is used in this experiment instead of more expensive reagent grade materials. After curds form and are separated from the whey, the acid is neutralized with the sodium bicarbonate.

The clumps of curds are comprised of casein, a protein found in milk. Casein proteins make up 3% of whole milk. Glues made from casein include products such as Elmer’s and other woodworking glues. The relationship between the Borden Company, it’s mascot Elsie-the-Cow and glue becomes more apparent when you consider that Borden purchased the Casein Company in 1929, and introduced its first glue, called Casco glue in 1932. Casein can also be poured into molded into forms to making a variety of plastic items such as combs, bead, button and umbrella handles.