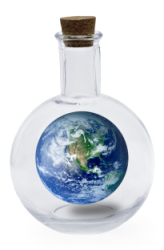 The Earth's climate has changed many times in the past. Subtropical forests have spread from the south into more temperate (or milder, cooler climates) areas. Millions of years later, ice sheets spread from the north covering much of the northern United States, Europe and Asia with great glaciers. Today, nearly all scientists believe human beings are changing the climate. How can that be?

Over the past few centuries, people have been burning more amounts of fuels such as wood, coal, oil, natural gas and gasoline. The gases formed by the burning, such as carbon dioxide, are building up in the atmosphere. They act like greenhouse glass. The result, experts believe, is that the Earth heating up and undergoing global warming. How can you show the greenhouse effect?

What do you need?

Another version of a greenhouse is what happens inside an automobile parked in the sun. The sun's light and heat gets into the vehicle and is trapped inside, like the plastic bag around the jar. The temperature inside a car can get over 120 degrees Fahrenheit (49 degrees Celsius).