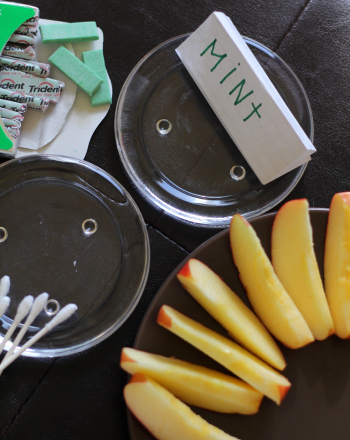 Chewing gum is tasty and fun. There are so many different brands and flavors to try!  But what effect does it have on your teeth? You’ve probably heard some people say that chewing gum helps keep your teeth clean. You’ve also probably heard others say the exact opposite. How are we going to resolve this problem? We’re going to do an experiment.

How does chewing gum affect your teeth?

Scientists have proven that gum chewing can help remove bacteria from our teeth because the friction from chewing gum rubs off many of the germs. However, this can never get rid of all the mouth’s bacteria. Sugar is like food for bacteria—the more sugar in the gum, the more the mouth’s bacteria will thrive. Fruit-flavored and other sugary chewing gums may remove some bacteria, but will cause their own bacterial growth in the mouth because of their high sugar content. Mint-flavored gums do an average amount of cleaning to the teeth because they generally have less sugar than fruity gums.

But why is cinnamon-flavored gum the best at cleaning teeth? Cinnamon has been scientifically proven to be a natural germ killer. Regardless of whether the gum has cinnamon oil, cinnamon flavor, or actual cinnamon as an ingredient, cinammon-flavored gum excels at cleaning bacteria from the mouth. What if you tried foods other than gum? Or replaced them with liquids? You‘re well on your way to becoming a scientist in the making. Keep experimenting!

A Brief History of Bubble Gum
Worksheet
A Brief History of Bubble Gum
Ever wondered how bubble gum got its start? Give your child practice reading a time line with this worksheet all about the humble beginnings of bubble gum.
2nd grade
Social studies
Worksheet
Which Gum has the Longest Lasting Flavor?
Science project
Which Gum has the Longest Lasting Flavor?
Tired of gum with flavor that lasts for just a couple of minute? Put gum to the test with this chewy science experiment!
3rd grade
Science project
Does Chewing Gum Affect Test Performance?
Science project
Does Chewing Gum Affect Test Performance?
This experiment will evaluate if chewing gum affects students' test performance.
6th grade
Science
Science project
Does Chewing Gum Help You Concentrate?
Science project
Does Chewing Gum Help You Concentrate?
This project investigates whether chewing gum can help a majority of people with focus and concentration.
High school
Social studies
Science project
Healthy Cheesecake
Activity
Healthy Cheesecake
Help your fourth grade scientist practice measurement, and make a scrumptious, healthy summer cheesecake in the process!
4th grade
Activity
Let's Eat Healthy!
Lesson plan
Let's Eat Healthy!
In this lesson, students will learn how to make healthy choices! They will sort food into healthy and unhealthy categories, and describe their color.
preschool
Science
Lesson plan
Healthy Friendships
Activity
Healthy Friendships
Children will discuss what it means to have healthy friendships and create a unique friendship painting that illustrates the qualities of good friends.
2nd grade
Activity
Healthy Burgers
Activity
Healthy Burgers
Here are three healthy burger recipes your second grader can help you whip up for this year's Fourth of July barbecue!
2nd grade
Activity
Food Is Fantastic: Healthy or Not Healthy?
Worksheet
Food Is Fantastic: Healthy or Not Healthy?
Cut out the pictures of the different foods and paste just the healthy ones onto the plate.
kindergarten
Math
Worksheet
Healthy Food Coloring Page
Worksheet
Healthy Food Coloring Page
Some of the most delicious foods are also the most healthy for us! Inspire your little one to love her fruits and veggies with a healthy foods coloring page.
kindergarten
Worksheet
Making Healthy Choices
Worksheet
Making Healthy Choices
With this social emotional learning worksheet, young learners will consider different scenarios and explore how making healthy choices makes them feel.
kindergarten
Worksheet
Healthy Lunches Shopping List
Worksheet
Healthy Lunches Shopping List
Get healthy lunch ideas with this printable shopping list, perfect for back to school.
High school
Worksheet
We enable strictly necessary cookies to give you the best possible experience on Education.com.Cookie policy