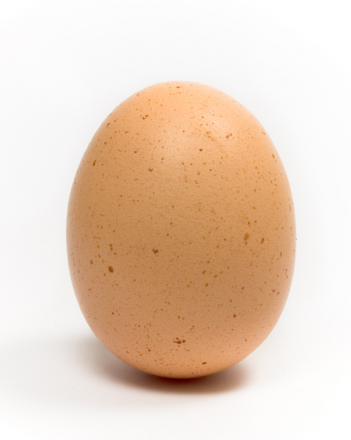 You may be one person, but you're made up of millions and billions of cells! Have you ever thought about all the tiny, microscopic cells that make up you? While your cells are much too small to see without a microscope, there are ways to create the look of a cell in your very own home without fancy equipment. In fact, everything you need is right in your kitchen.

The white shell dissolved in the vinegar, revealing a squishy, translucent, or semi-transparent, inside. The egg should have expanded during the three days in the vinegar bath, and the yolk should have spilled out when you poked your finger into the egg.

It's amazing that eggs look a lot like cells. The translucent egg covering beneath the dissolved shell acts the same as a cell's membrane, the squishy boundary that holds the cell together. The yolk acted as the cell's nucleus, and the rest of the liquid was like a cell's cytoplasm. Can you imagine how millions of those naked eggs make up each human being?

When you dropped your egg in the vinegar, the chemicals inside the liquid reacted with the shell, breaking it down until it completely dissolved. In this case, the process is called osmosis. If vinegar can do that to an egg, what else do you think it could do? Keep guessing and testing new ways to experiment. With science, projects and results are endless. What happens if you soak the egg in lemon juice? Will you get the same result? What happens if you boil the egg first? There's only one way to find out!

Easter Egg Holder
Worksheet
Easter Egg Holder
Protect your precious egg hunt plunder with this Easter egg holder craft.
3rd grade
Arts & crafts
Worksheet
Felt Egg
Activity
Felt Egg
each some early sewing skills with this cute felt egg project that can be reused as a silly gift, a toy for younger siblings, or a doll accessory.
3rd grade
Arts & crafts
Activity
Egg Carton Game
Activity
Egg Carton Game
Similar to a carnival toss, this egg carton toss game is sure to provide hours of fun.
3rd grade
Activity
Design Challenge: Egg Drop
Activity
Design Challenge: Egg Drop
In this activity, your child will be challenged to create a device that protects an egg when it is dropped from a height of about 10 feet.
3rd grade
Science
Activity
Egg Lab
Science project
Egg Lab
...Grade Level: 3rd - 4th; Type: Life Science Objective: An egg is surrounded by a thin membrane. This only lets water into it....
3rd grade
Science project
Creative Writing Prompt: The Best Easter Egg
Worksheet
Creative Writing Prompt: The Best Easter Egg
In this creative writing worksheet, learners will use their imagination to dream up, write about, and draw an extra-special Easter egg.
3rd grade
Reading & Writing
Worksheet
Easter Egg Designs
Activity
Easter Egg Designs
...Mix the commercial Easter egg dyes into individual egg dying cups, following instructions on the box. Dip an egg into each color, again following directions....
3rd grade
Arts & crafts
Activity
Bounce an Egg
Activity
Bounce an Egg
...Invite your child to take her rubbery egg to the bathroom or kitchen sink and see what happens when she drops her egg!...
3rd grade
Science
Activity
How to Dye Eggs with Food Coloring
Activity
How to Dye Eggs with Food Coloring
You and your child can make Easter egg dye with the food coloring that you already have in your cupboard.
3rd grade
Arts & crafts
Activity
Easter Division #5
Worksheet
Easter Division #5
Enjoy an egg-cellent Easter review of times tables, with simple division! Hunt for a quotient in each colorful egg.
3rd grade
Math
Worksheet
Easter Multiplication #5
Worksheet
Easter Multiplication #5
Enjoy an egg-cellent Easter review of times tables! Hunt for a solution to the multiplication problem in each colorful egg.
3rd grade
Math
Worksheet
Easter Division #2
Worksheet
Easter Division #2
Here's an Easter egg hunt with a twist! Each egg in this festive worksheet contains one simple division problem for your third grader to solve.
3rd grade
Math
Worksheet
We enable strictly necessary cookies to give you the best possible experience on Education.com.Cookie policy