Oxygen in Water: A Bubbly Science 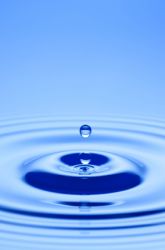 It doesn't take a degree in chemistry to know that water is made up of two elements: hydrogen and water. Sure, you're familiar with that famous formula, but did you know that some types of water can have more oxygen than others? Use a nifty test kit to discover the amounts of oxygen in water that is sitting and running. Where do you think you'll find the most oxygen?

Does sitting or running water have higher levels of oxygen?

The running water should have higher levels of oxygen than the sitting water.

Isn't water just water? How does more oxygen get into running water than sitting water? To understand this, let's take a look at the different ways oxygen is able to mix with water. First up, we have photosynthesis, or the process that allows plants to make food. Using photosynthesis, plants take in carbon dioxide and sunlight while releasing oxygen. Plants like algae, that are underwater, release this oxygen directly into the water.

However, in your experiment, no algae plants were present. That means we need to move on the second way oxygen can get into water. Sometimes oxygen in the air mixes with water. This can happen when there is an increased amount of movement -- specifically in running water! Think of the molecules in water and in air as marbles. The air molecules can be tiny white marbles, and the water molecules larger blue marbles. If you tried to pour the blue marbles through a layer of white marbles, some of marbles would get mixed. That same exact thing happens with running water. Since molecules like to move from an area of higher concentration, which describes how tightly packed in molecules are, to an area of lower concetration, some of the air molecules transfer into the water.

How do you think plants and sea creatures "breathe" underwater? Try using your dissolved oxygen test kit to see if water with living organisms in them have higher amounts of oxygen than water without. You can test sea water or even water from an aquarium -- or somewhere entirely different. Just don't let your oxygen exploration stop now! Continuing to guess and test scientific theories is what being a scientist is all about.