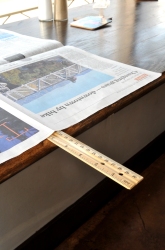 In those rare moments when we actually think about the air around us, we typically think of the oxygen that allows us to breathe. But did you know that oxygen makes up only 21% of the Earth’s atmosphere? The rest is composed of nitrogen, argon, carbon dioxide, varying amounts of water vapor, and trace amounts of many other gases. These gasses form our atmosphere, a layer of air that is 80 miles thick. Like any type of matter, the gases in air have mass, and since Earth’s gravity causes the atmosphere to press down on the Earth’s surface, we call this force atmospheric pressure. Pressures are expressed in force per unit area. At sea level, the 80-mile column of air exerts a pressure of 15 lbs per square inch (psi). We don’t usually notice the earth’s atmosphere pressing down on us, because we’ve lived with it our entire lives! However, this cool science experiment can help us appreciate just how powerful air pressure is.

How can we see and feel the power of air pressure?

Download Project
Subject
Science
Thank you for your input.

During the first chop, the ruler probably flew off the table and didn’t break. During the second chop, you may have managed to chop the stick in two!  (If you didn’t get this result for the second chop, try again, making sure that your newspaper lies perfectly smooth and that you strike cleanly.)

You were able to chop the stick in two because of air pressure. When you spread out the newspaper on top of the stick, you basically created a large suction cup because you’re preventing air from flowing underneath. When you strike the ruler, it tries to lift up against the newspaper, but because the air can’t flow very quickly into the space between the table and the newspaper, most of it simply pushes down on the newspaper (and the ruler).

Suppose you had 8 inches of ruler covered by the newspaper. If the ruler were one inch wide, that would mean that the area is 8 square inches.  Remember that the 80 mile column of air above us presses down at 15 pounds per square inch. That means your stick had 120 pounds of pressure holding it down while you chopped (This isn’t a perfect explanation, but it should give you a rough idea of what’s going on). The point is that when the ruler tries to lift off of the table, it has to push against all 120 of those pounds.

If you live at a higher altitude, the air pressure is a bit less.  For instance, citizens of the mile high city of Denver, Colorado have a shorter column of air (about 79 miles) pressing down on them—but it’s still more than enough pressure to hold the stick down.

There are lots more experiments showing the power of air pressure. Air pressure can push an egg into a bottle orr crush a can.

Using a Ruler
Worksheet
Using a Ruler
You can estimate how long your pencil is, but you won't know for sure without a ruler. Cut out the ruler on this worksheet and get measuring!
2nd grade
Math
Worksheet
Barometric Pressure
Science project
Barometric Pressure
Science fair project examining barometric pressure, and how it can be used to predict the weather. How does atmospheric pressures relate to weather conditions?
3rd grade
Science
Science project
Drawing with a Ruler
Worksheet
Drawing with a Ruler
Straighten out your drawing skills with a fun ruler worksheet! Practice using the ruler to draw straight lines, create patterns, or make shapes.
1st grade
Math
Worksheet
How to Use a Ruler
Activity
How to Use a Ruler
Little hands and feet can be a big help when learning how to measure! In this activity your preschooler will practice using a ruler and writing numbers.
preschool
Activity
Pretend Newspaper Article
Worksheet
Pretend Newspaper Article
Let's write a pretend newspaper article! Here's a silly way for your child to look at telling a story the way it might be written for a newspaper.
5th grade
Reading & Writing
Worksheet
Measure Using a Ruler
Worksheet
Measure Using a Ruler
Help your kindergartener learn to measure using instruments with this worksheet. How does each one measure up?
kindergarten
Math
Worksheet
Newspaper Editing
Activity
Newspaper Editing
Show your teens the connection between making history and writing it by having them write, illustrate, and edit a newspaper from the past.
High school
Social studies
Activity
Create a Family Newspaper
Activity
Create a Family Newspaper
Creating a family newspaper is a great way to teach your child the characteristics of a newspaper article, give him or her some excellent writing practice.
Middle school
Activity
Ruler Measurement #2
Worksheet
Ruler Measurement #2
This worksheet will help your child practice using a ruler to measure in inches and centimeters.
2nd grade
Math
Worksheet
How to Read a Ruler
Worksheet
How to Read a Ruler
Show your second grader how to use a ruler with this math worksheet!
2nd grade
Math
Worksheet
Water Pressure at Depth
Science project
Water Pressure at Depth
How does water pressure change with depth? Kids learn how pressure works underwater with this cool and easy demo.
2nd grade
Science project
Newspaper Flowers
Activity
Newspaper Flowers
If you've got a kid who thinks she's "too old" for crafts, introduce her to beautifully simple newspaper flowers.
4th grade
Arts & crafts
Activity
We enable strictly necessary cookies to give you the best possible experience on Education.com.Cookie policy