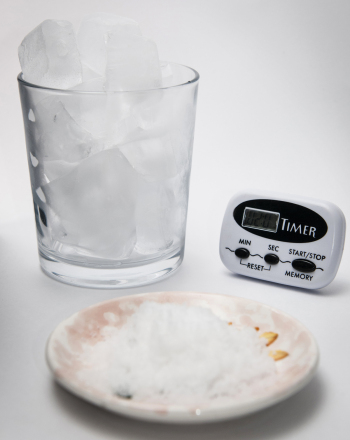 To determine which salt, magic salt or regular salt is most effective in melting snow?

On the information level, the student will acquire some basic and some practical information on the chemistry and physics of water, its melting an d freezing points and how various differing chemical compounds   are utilized to promote a change of state. For example, just plain salt can be used to raise the melting point of water or lower the freezing point. Salt lowers the temperature at which water freezes. Salt absorbs moisture and forms ions when dissolved in water. In the case of snow or ice, when salt lowers the melting or freezing point of water, it serves as a freezing point depressor.  Other substances that dissolve in water also lower the freezing point of the solution. The amount by which the freezing point is lowered depends only on the number of molecules dissolved, not on their chemical nature. This so called freezing point depression is described as a colligative property of water. This property is one that depends on the number of ions that a substance produces when placed in solution. The more ions a substance produces when in solution in water, the more effective it is in lowering the freezing point of water. Salts such as sodium chloride and calcium chloride which ionize are useful in de-icing. However there are other variables to be considered such as the effects of these salts on grass, pavements, cars, concrete and living animals in the area.

As for the methodology of this project, this science fair experiment also serves to acquaint students with the essential processes of sciencing such as the importance of the use of a control, of identifying dependent and independent variables, of data collection, of pictorial and or graphic presentation of data and of being able to make better judgments as to the validity and reliability of their findings. They take on the role of scientists and in the process behave as one.