Parts of a Bean Seed 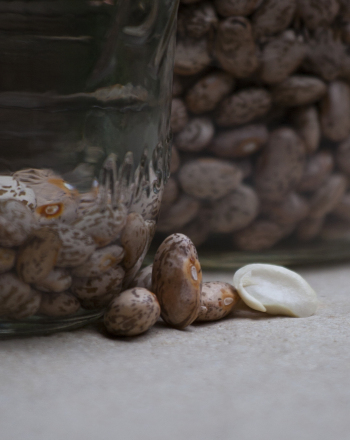 What’s inside a bean? Take a peek into the beginnings of a beanstalk, and see how a bean grows.

What are the parts of a bean seed?

When you look inside a bean, it’s not just empty space in there. A bean is made up of different growing parts, and you’ll be able to see them quite clearly with your magnifying glass.

The cotyledon is the largest part of the inside of the bean. It stores a lot of the food for the growing bean. Like a chick embryo has a yolk and a baby has an umbilical cord, a bean seed has a cotyledon to act as a source of food.

A bean needs water to grow. At first, it absorbs this through a small hole called the micropyle that is found in the hilum, the scar on the side of the bean that shows where it was attached to its parent plant. When the bean germinates, or begins to grow, the baby bean plant starts to take shape inside the bean seed. It uses the starch that’s in the cotyledon as food.

Plant these seeds in soil in five pots and see how each one grows. Mist the beans daily. Remember what the cotyledon gives to a plant. Which one will grow the best?