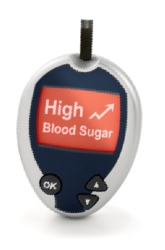 Determine which foods and drinks contain the most glucose. This can be helpful for people with diabetes so that they know which foods to eat when they experience low blood sugar symptoms.

When people with diabetes experience low blood sugar symptoms, they are supposed to eat something high in glucose (a type of sugar) right away. But which foods are high in glucose? This science experiment lets you figure out the answer.