Tides in the Chesapeake Bay 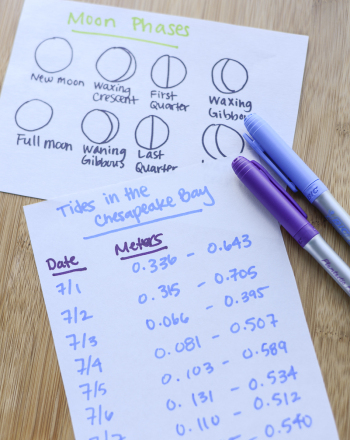 I chose to study tides as my project during the summer of 2000 while I was at the Maryland Summer Science Center Horsehead Wetlands Program. One of the teachers there introduced the subject of tides to me and I found it very interesting. I have attended this camp for three years now and have learned that the marsh floods once a month, due to high tides. I had never gotten to experience this before and I thought it would interesting to see. The last day we came to the marsh it happened. One day we came to a marsh where there was practically dry land and the next day the water flooded up to our knees in the same marsh! This made me sure that tides would be my project.

This research project concerns two factors that affect tidal level. These factors are moon phase and wind direction; they will be tested to see if they have any affect upon the high tide mark in the Chesapeake Bay. Tides are the daily rise and fall of the oceans, bays, streams, rivers, etc. The usual frequency of tides is two high tides and two low tides daily. The lowest level of water is defined, as the "low tide water mark" while the highest water level is the "high tide water mark".

All of my data (date, moon phase, wind direction, and tidal level) will be entered into a computer on a spreadsheet on Microsoft Excel 2000. Then graphs will be drawn up on the same program. The graphs will compare moon phases with tides and wind direction and tides.

What is a tide?

A tide is the daily rise and fall of the oceans. The lowest level of water is defined, as the "low tide water mark" while the highest water level is the "high tide water mark". The usual frequency of tides is two high tides and two low tides daily. Sometimes there is only one of either. This is because of the specific shape of the land, and the water gets trapped within an enclosed area of land.

Tides are caused by the gravitational pull of the sun and moon and by the rotation of the earth on its axis. As the earth spins, each part of the water is under the moon once about every 24 hours. The water bulging towards the moon makes the high tide. The centrifugal force causes another high tide on the opposite side of the earth. The centrifugal force is the force that pulls a thing outward from the center when it is spinning. This force pulls the water away from the earth to form a bulge while it is spinning.

Tides are affected by the sun’s gravitational pull. The moon’s gravity also affects them. Although the sun is 27 million times larger than the moon, it is also 400 times further away. So the tidal force caused by the Sun is 50% less than the tidal force of the moon. Also moon phases affect tides. During the full and new moon, also referred to as spring tides, the tides are 20% larger and during first and third quarter moons, also referred to as neap tides, the tides are 20% smaller.

What are spring and neap tides?

During spring tides the tides are 20% bigger. Spring tides are when the sun, moon, and earth are lined up in a linear fashion. This causes higher high tides and lower low tides. This is because the sun and moon’s gravitational pulls are working to pull the water out higher in a higher high tide. Thus forming a lower low tide. Spring tides occur on new and full moons. During neap tides the tides are 20% smaller. Neap tides are when the sun, moon, and earth form a right angle. This causes higher low tides and lower high tides. Neap tides occur during the first and third quarter moon.

Tidal level in the Chesapeake Bay is affected by the wind direction. When the wind was blowing toward the south, (180º) the water was being pushed out of the Bay and it created lower high tides. This shows that my second hypothesis was right! I think that these results are significant enough to be used by scientists. The results make sense because, when the tidal level is lower, the wind direction is near 180º, and when it is higher, the wind direction is near 0. Some factors that could affect the tidal level, like the sun’s gravitational pull, the wind speed, and wind duration could have changed the results. I could use this data in further experiments to figure out what else affects the tidal level of the Chesapeake Bay.

Tidal level in the Chesapeake Bay is not affected by moon phases. During the full and new moons, the high tidal level should be the highest. During 1st and 3rd quarter moons, the high tides should be the lowest. Instead the high tide levels seem to show no pattern with the moon phases. During 1st and 3rd quarter moons the high tides are just as high as when there are new and full moons. Also the tides during the 1st and 3rd quarter moons should be lower than average and they are not. This shows that my hypothesis about moon phases was incorrect. In my background reading, it was proved by other scientists that moon phases do affect tidal level. When I did this project, I came up with something else. The Chesapeake Bay results were different than the background reading research because the research was probably done on open bodies of water such as oceans. The Bay has one main mouth where all the water must go in and out during the tides. Oceans typically have less land surrounding them and the water is not limited about where it comes and goes. I could use this data in further experiments on tides.

Chesapeake Bay Retriever Lab Mix
Worksheet
Chesapeake Bay Retriever Lab Mix
She's Chesapeake Bay retriever, part lab, and is one of 20 adorable winners from our Color Your Mutt contest.
1st grade
Worksheet
Chesapeake Colonies
Worksheet
Chesapeake Colonies
This writing exercise about the Chesapeake Colonies will get social studies students in the minds of some of the first settlers to come to America
5th grade
Social studies
Worksheet
How Do the Phases of the Moon Affect the Tides?
Science project
How Do the Phases of the Moon Affect the Tides?
How do the phases of the Moon and gravity cause spring tides and neap tides? Does the Sun play a role in the tides? Figure it out in this fun science project!
5th grade
Science project
How do Tides Work?
Worksheet
How do Tides Work?
Ever wonder what makes the ocean tide come in and out? With this worksheet, your student will learn how the tides work!
Middle school
Science
Worksheet
Color the World! Ha Long Bay
Worksheet
Color the World! Ha Long Bay
Home to a collection of rock formations, the cliffs around Ha Long Bay form islands and grottos known for their natural beauty.
2nd grade
Social studies
Worksheet
Bay State
Worksheet
Bay State
...Seuss was born in Springfield, a town near the southern border of the Bay State. Can you guess which state I am?...
2nd grade
Social studies
Worksheet
Down By the Bay
Song
Down By the Bay
Teach rhyming the silly way, with our rendition of this classic sing-along song.
preschool
Song
Color the Golden Gate Bridge
Worksheet
Color the Golden Gate Bridge
This coloring page features the Golden Gate Bridge stretching across the mouth of the San Francisco Bay.
kindergarten
Worksheet
Playing Cards
Worksheet
Playing Cards
Keep winter break boredom at bay with a printable deck of snowy playing cards!
4th grade
Worksheet
Thanksgiving Craft Decoration
Worksheet
Thanksgiving Craft Decoration
Keep the Thanksgiving can't-waits at bay by crafting your own miniature paper feast, complete with turkey, mashed potatoes, and pie!
1st grade
Arts & crafts
Worksheet
Tissue Pouch
Activity
Tissue Pouch
Keep school day sniffles at bay with a simple felt tissue cozy that fits neatly in a 3-ring binder.
1st grade
Arts & crafts
Activity
Paper Salad
Worksheet
Paper Salad
Invite your first grader to create a colorful paper salad with potatoes, carrots, celery, and bay leaves! She'll color, cut, and paste the salad ingredients.
1st grade
Worksheet
We enable strictly necessary cookies to give you the best possible experience on Education.com.Cookie policy