What is Surface Tension? 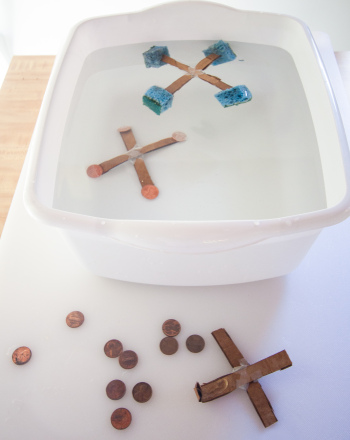 Can you skate across the surface of liquid water? Water bugs can! Discover how water-skating insects use surface tension to keep from sinking by making a model water walker that can move around the surface of the water with a penny on its body.

Can you design a water walker that can skate on liquid water?

Water striders are in the family Gerridae, and they have many different names, including water skaters and water bugs.

Water is tense! The molecules of water are so tiny that you can’t see them, but you can see what happens when they cling to other water molecules.

Some water walkers such as the basilisk lizard rely on the force of their feet to push down quickly on the water and move them forward. However, every time the lizard’s feet strikes the water, it breaks the water’s surface tension. The feet of a water strider rest on the surface of the water. The bug’s weight is distributed over each of its four feet, and the weight placed on each individual foot is not enough to break the surface tension.

What would happen if you added modeling wax or another waterproof substance to your water strider’s feet? Get creative!