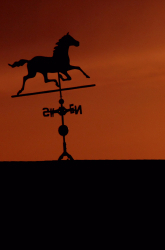 The project looks for a correlation between wind direction and subsequent weather patterns.

The goal is to have the student develop and test a hypothesis about using a weathervane to predict the weather based on observations about wind direction and subsequent weather patterns.

Wind forms when air moves from a region of high air pressure to one where the air pressure is lower. The air is more dense in the high pressure region, so it is drawn into the region of lesser density – or lower pressure. As winds blow into the low pressure area, the air moves up. This can lead to the formation of clouds and precipitation.

Weathervanes indicate the direction the wind is coming from. This information may provide clues about the approaching weather patterns. For example, winds from the south are often warm and carry more moisture than those from the north.

Although there are notable exceptions, most weather patterns in the U.S. move from west to east. This is due to wind patterns across the earth.

There are many weather proverbs linking wind direction and weather patterns. These proverbs are based on observations that have been passed down through generations. For example, one proverbhas it that winds from the west bring fair weather, while those from the east more often bring storms. Another notes that during winter, strong winds from the north may bring snow or hail. Still another holds that winds from the south bring warm and humid conditions.

Can be found on the Internet or at a garden store.

If you live in a part of the country where weather patterns remain stable for many weeks at a time, you may have to extend the monitoring period.