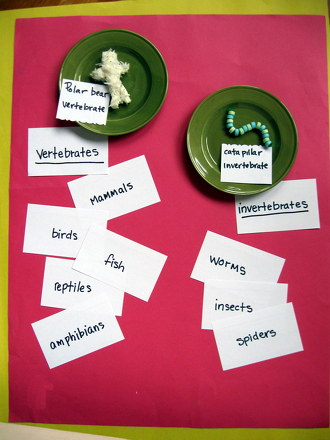 Reviewing animal characteristics with your child can go a long way in helping her to remember important science concepts and reinforce at home what she's already learning in school. Here’s a fun and tasty way to help her review classifying characteristics of animals.

Vertebrates and Invertebrates
Worksheet
Vertebrates and Invertebrates
Stretch your backbones and learn about the creatures that have a spine and those you don't!
2nd grade
Science
Worksheet
Invertebrates Crossword Puzzle
Worksheet
Invertebrates Crossword Puzzle
Did you know that invertebrates don't have backbones? Find out some different types of invertebrates with the clues in this crossword puzzle.
4th grade
Reading & Writing
Worksheet
Life Science Crossword: Classifications
Worksheet
Life Science Crossword: Classifications
To complete this life science crossword, kids need to put the 9 levels of biological classification in the correct order.
3rd grade
Science
Worksheet
Delicious Red Velvet Cupcakes
Activity
Delicious Red Velvet Cupcakes
This year for Valentine's Day, you and your child can bake up a batch of classic red velvet cupcakes and learn more about the history of this vintage treat.
4th grade
Activity
Corned Beef and Cabbage
Activity
Corned Beef and Cabbage
Patrick's Day staple, corned beef and cabbage is a delicious way to celebrate the holiday and introduce your fourth grader to the kitchen.
4th grade
Activity
Create a Sandwich
Worksheet
Create a Sandwich
Can you come up with a delicious and innovative concoction?
4th grade
Reading & Writing
Worksheet
Peru Facts
Worksheet
Peru Facts
Find out all about the gorgeous mountains, delicious food and unusual national animals that make Peru such a unique and wonderful nation.
4th grade
Reading & Writing
Worksheet
Bake Pumpkin Chocolate Chip Muffins
Activity
Bake Pumpkin Chocolate Chip Muffins
Crowned with orange cream cheese frosting and studded with chocolate chips, these pumpkin muffins make a delicious fall treat.
4th grade
Activity
Potato Pancakes
Activity
Potato Pancakes
Patrick's Day, bond with your child over delicious potato pancakes that work for any meal.
5th grade
Activity
Calculate the Change
Worksheet
Calculate the Change
You've got a $5 bill and a hunger for some delicious candy corn. Can you calculate how much change you'll receive from the cashier?
4th grade
Math
Worksheet
Pumpkin Pancakes
Activity
Pumpkin Pancakes
Flip your way into the fall season with this easy and delicious pumpkin pancake recipe that your child can make on weekend mornings!
4th grade
Activity
What is Pi?
Worksheet
What is Pi?
In mathematics, pi is more than just a delicious treat! Learn about the world's most famous irrational number with this worksheet.
4th grade
Worksheet
We enable strictly necessary cookies to give you the best possible experience on Education.com.Cookie policy