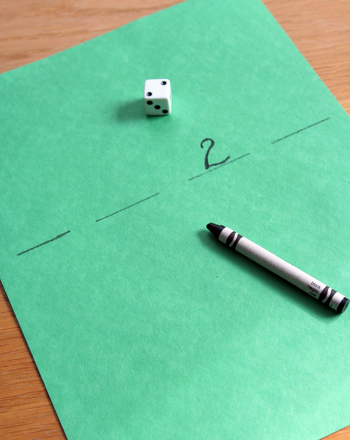 This game provides your child with the opportunity to create, write, and read numbers. He’ll be using all of these skills in the middle grades, when he uses numbers, decimals, fractions, and percents to describe operations, computations, measurements, and patterns. Understanding the value of each digit in a number strengthens your child’s mathematical communication skills. Creating and reading four-digit numbers will give your child an opportunity to practice the number skills he’s learning at school. So get ready and roll the number cube!

What's going on?  This game reinforces the connection between abstract digits and the way their values will differ depending on their place in a large number.  Second graders often struggle with this idea, especially as numbers get bigger, and the more you can practice, the better.  Plan to play lots of rounds--when it comes to math fundamentals, practice really does make perfect.