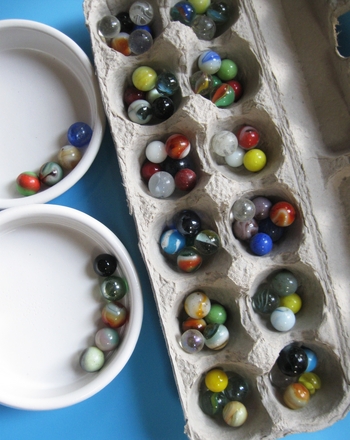 This classic game of strategy traces its roots to Africa. It's available in toy and game stores with a sturdy wooden board, but your child can craft a homemade version that works just fine with an egg carton and a few beads! Before you know it, she'll boost her strategy skills to become an expert at the traditional rules. Then, she can get creative and come up with her own twist!

Since the first player sometimes has an advantage in Mancala, make sure to alternate who goes first when you play. Keep the game board and beads together by shutting the egg carton tightly and storing it that way while you aren’t playing.

Play Planner
Worksheet
Play Planner
Use this play planner to give your students a head start on writing their own play!
3rd grade
Reading & Writing
Worksheet
Piecing Together a Play!
Lesson plan
Piecing Together a Play!
In this integrated reading and writing lesson students will learn how to construct a play, while simultaneously learning about the components of a play!
3rd grade
Reading & Writing
Lesson plan
What’s in a Play?
Worksheet
What’s in a Play?
With this worksheet students will define the importance of play vocabulary words and provide examples.
3rd grade
Reading & Writing
Worksheet
Felt Play Food: Ravioli
Activity
Felt Play Food: Ravioli
If your child is hungry to work on his sewing skills, put together a plate of this felt play food ravioli.
3rd grade
Arts & crafts
Activity
Pumpkin Play Dough!
Activity
Pumpkin Play Dough!
Use this easy recipe to help your child make some delicious smelling pumpkin play dough. They can use their math skills to measure and mix and then have hours of fun playing!
kindergarten
Math
Activity
Putting a Play Together!
Lesson plan
Putting a Play Together!
In this lesson, students will explore the different parts of a drama or play.
3rd grade
Reading & Writing
Lesson plan
Play Whistle Hide-and-Seek
Activity
Play Whistle Hide-and-Seek
Encourage a group of third graders to play this fun game of Whistle Hide-and-Seek as a warm-up to get them prepared for finding a "lost" camper.
3rd grade
Science
Activity
Word Play
Worksheet
Word Play
...This fun word game is great for kids who like to play with words! Each game starts with a clue and the word that is the answer to the clue....
3rd grade
Reading & Writing
Worksheet
Play Dough Brain
Worksheet
Play Dough Brain
...Young learners will create a play dough brain that includes the prefrontal cortex, amygdala, and the hippocampus (in three different colors)....
2nd grade
Worksheet
Let's Play Ball
Lesson plan
Let's Play Ball
...Explain to the students that they are going to play a game of silent ball. Let them know that after they are put into groups they must make a data chart....
3rd grade
Math
Lesson plan
Play Sentence Scramble
Activity
Play Sentence Scramble
This hands-on family activity gives your child practice creating compound sentences, while teaching him skills that will help him become a better writer!
3rd grade
Reading & Writing
Activity
Play Forensic Flashlight Tricks
Activity
Play Forensic Flashlight Tricks
Learn to solve a crime scene investigation using an important forensics tool: oblique lighting.
3rd grade
Science
Activity
See this activity in a set: 3rd Grade Math Games Medley
We enable strictly necessary cookies to give you the best possible experience on Education.com.Cookie policy