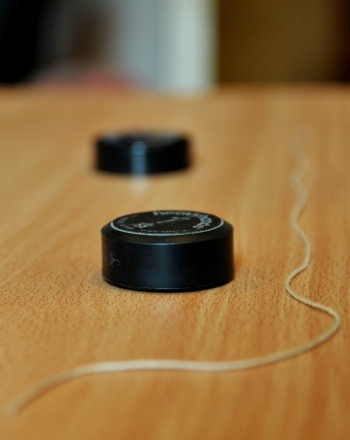 The final shot in the pool game is yours, but the cue and the eight ball aren’t nicely lined up with any of the pockets. Looking around, the closest pocket is 45 degrees off the line between the two balls. You take aim for a glancing blow, the cue ball strikes the eight ball…what happens next? Do you sink the eight ball? Which way does the cue ball end up going? And how can you make the eight ball go off in a different direction?

Pool is a great example of physics in action. After every collision, the momentum of all the balls—the product of their mass and velocity—has to be conserved. That is, the total momentum before the collision has to be the same as the total momentum after the collision. And, roughly speaking, the energy must be conserved as well; the balls can’t fling away from each other with more energy than you give them. These two laws—the conservation of energy and the conservation of momentum—work together to steer the balls around the table.

In this project, you’ll experiment with colliding masses, see how they collide, and maybe learn how to use physics to plan the perfect pool shot!

At what angle will two equal-mass balls move away from one another after a glancing collision?

The angle between the pucks’ paths will be close to ninety degrees—a right angle.

Because all the masses are equal, the m’s cancel and you end up with:

This equation has the exact same form as the Pythagorean Theorem, c2  = a2 + b2 ​ where a and b are the sides of a right triangle and c is the hypotenuse. This only works if va and vb are at right angles to one another. 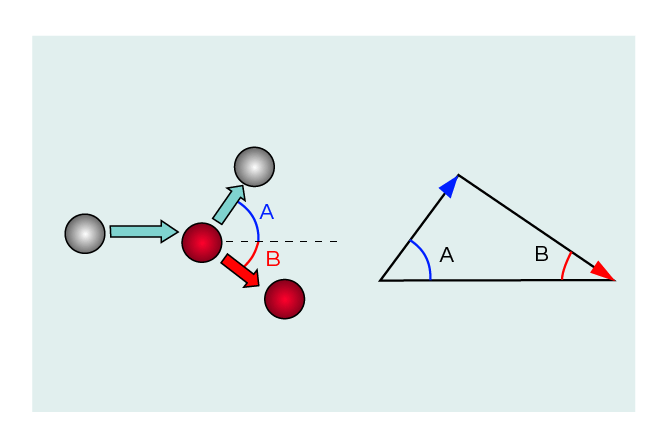 Canceling the masses, you end up with

In the y direction, there is initially no momentum. To make everything balance, that means the y-direction momentums after the collision must perfectly cancel:

Putting this together with the conservation of energy, you find that all the velocity components after the collision have the same magnitude, with the y components pointing in different directions. You end up with the final velocities pointing at right angles away from each other.

In an inelastic collision, kinetic energy is not conserved; some energy is lost to the surroundings. This means that, while the y components of the velocity still have to cancel, the x components can be different. The balls will no longer bounce away at right angles.

In reality, perfectly elastic collisions rarely happen; some energy is always lost. Collisions between subatomic particles (protons and electrons) are very nearly elastic; so are atoms in an ideal gas. Space probes that slingshot around a planet behave the same way as elastic collisions as well.

What happens if you use pucks (or balls) with different masses? For example, if you’re using air hockey pucks, try making the stationary puck be two pucks stacked on top of one another. What changes?

What happens if you use a surface that isn’t smooth (for example, a carpet)? How does that change the angle? Is it less than or more than a right angle? Can you explain what you’re seeing using the equations mentioned above?