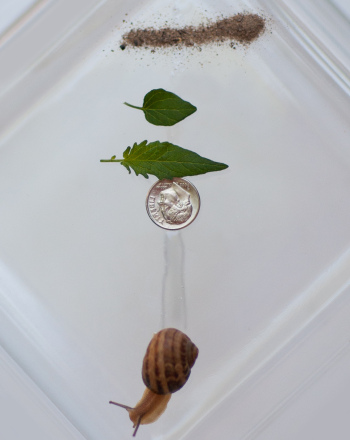 Are snails sticky and icky, or does all that slime have super powers? In this experiment, you’ll discover the power of the tiny snail.

How powerful is a snail’s slime?

Download Project
Grade
Kindergarten
Thank you for your input.

Snail slime is pretty sticky! If your paper is slimy enough, you should be able to pick up small pieces of leaf. If it’s really slimy, you may even be able to pick up a dime for a short time. Sand will stick to the slime trail on the paper, making it look like a sandy pathway.

Snails are amazing figure skaters. They move their long, muscular foot along the ground, sliding on a rink that they make with their slime. This allows the snail to move across bumpy places that might otherwise hurt its sensitive foot.

So what is snail slime made of? Slime is made of sugars and protein, and it’s fairly similar to the goopy mucus that comes out of your nose when you’re sick.  One difference is the way the snails use their slime: they use it to move. Snail slime a slippery liquid when it’s under the snail, but when the snail has moved on, the slime left behind starts to become stickier. These two different properties allow the snail to glide over rough terrain and climb up the sides of plants and trees without falling off.

When you experimented with the slime, you should have found that it was pretty sticky. Leaves, sand, and even heavier things like dimes can stick to the slime. If you’d like to lift heavier things with snail slime, you probably need a large amount of slime. Snails make more slime when it rains, and their slime gets bigger in water.

Snail slime is so amazing that it’s even been used in beauty creams. Now that’s a sticky situation!

Spooky Slime
Activity
Spooky Slime
In this fun science project your child will get practice following directions and getting messy as they learn all about slime!
kindergarten
Arts & crafts
Activity
Snap the Snail
Worksheet
Snap the Snail
Practice your kindergarteners’ reading fluency skills as they read about a snail named Snap!
kindergarten
Reading & Writing
Worksheet
Counting Snails
Worksheet
Counting Snails
How many snails can you see? This fun and colorful worksheet will help your kindergartener practice counting up to 13.
kindergarten
Math
Worksheet
Nature Scavenger Hunt
Worksheet
Nature Scavenger Hunt
...learning worksheet prompts young learners to use mindful seeing to hunt down and draw pictures of objects they find in nature that contain patterns or spirals, such as a snail...
kindergarten
Worksheet
Just One More Foot
Lesson plan
Just One More Foot
...Draw a picture of one kid and one snail on the board, write (2) under the kid and (1) under the snail....
preschool
Math
Lesson plan
The Four Friends
Worksheet
The Four Friends
...Ernest was an elephant, a great big fellow, Leonard was a lion with a six foot tail, George was a goat, and his beard was yellow, And James was a very small snail....
kindergarten
Reading & Writing
Worksheet
Consonant Sounds: S Blends
Worksheet
Consonant Sounds: S Blends
...graphics to help guide them, students will practice listening for the letter blend, or combination of sounds, at the beginning of S words, such as "slide," "snail...
1st grade
Reading & Writing
Worksheet
Patterns in Nature
Activity
Patterns in Nature
...For example, consider the spirals on a snail's shell, or the patterns on the outside of a pineapple....
kindergarten
Activity
Shell Planter
Activity
Shell Planter
...The conch is a gastropod mollusk, which means they are in the same family of such other mollusks as the slug and the snail and can be found in the warm waters of the...
kindergarten
Arts & crafts
Activity
We enable strictly necessary cookies to give you the best possible experience on Education.com.Cookie policy