Egg in a Bottle 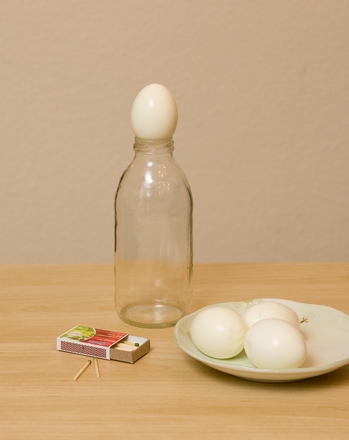 You don't have to be an egghead to know that science can be fun. Show your child a trick where the ordinary becomes extraordinary!

In this experiment, a hard-boiled egg will fit through a suspiciously small opening with the help of only a few matches. Your child will be amazed, and you'll be teaching her how seemly impossible acts are anything but—with the help of a little science!

Design Challenge: Making a Bottle Rocket
Activity
Design Challenge: Making a Bottle Rocket
In this design challenge, your child will make a bottle rocket using typical household items.
3rd grade
Science
Activity
Easter Egg Toppers
Activity
Easter Egg Toppers
Keep your boiled breakfast egg cozy and warm on Easter morning with a bright chick egg topper. This craft can also double as a puppet!
5th grade
Arts & crafts
Activity
Break the Egg
Activity
Break the Egg
Illustrate the importance of bicycle safety in this simple 5th grade science experiment. All you need to start are an egg, a Styrofoam ball, and rubber bands.
5th grade
Activity
Design Challenge: Egg Drop
Activity
Design Challenge: Egg Drop
In this activity, your child will be challenged to create a device that protects an egg when it is dropped from a height of about 10 feet.
3rd grade
Science
Activity
Creative Writing Prompt: The Best Easter Egg
Worksheet
Creative Writing Prompt: The Best Easter Egg
In this creative writing worksheet, learners will use their imagination to dream up, write about, and draw an extra-special Easter egg.
3rd grade
Reading & Writing
Worksheet
How Can You Tell The Age Of An Egg Without Cracking It Open?
Science project
How Can You Tell The Age Of An Egg Without Cracking It Open?
Demonstrate how to tell the age of an egg without having to crack it open.
5th grade
Science project
Pysanky Eggs
Activity
Pysanky Eggs
This Pysanky egg-decorating activity is perfect for young artists. Bring a little color and creativity to any holiday with this traditional Ukrainian craft.
5th grade
Arts & crafts
Activity
How to Make a Hygrometer: Sling Psychrometer
Science project
How to Make a Hygrometer: Sling Psychrometer
Learn how to make a hygrometer to measure relative humidity in this project. Make a sling psychrometer hygrometer with gauze, thermometers, and a bottle.
5th grade
Science project
Craft a Colonial Water Cooler
Activity
Craft a Colonial Water Cooler
Dive into U.S. colonial history by making a simple bottle gourd water cooler, crafted by colonists of Roanoke Island in the 16th century.
5th grade
Social studies
Activity
Make a Hummingbird Feeder
Activity
Make a Hummingbird Feeder
With a clear bottle and a few plastic straws, you can easily make a hummingbird feeder and demonstrate the effects of atmospheric pressure at the same time!
5th grade
Science
Activity
Arch Magic: The Unbreakable Egg
Science project
Arch Magic: The Unbreakable Egg
...Lay the four domes on a table with the cut sides down arranged in the shape of a rectangle....
Middle school
Science project
Easter Cupcakes
Activity
Easter Cupcakes
If it's Easter, it must be time for egg hunts. But we have to admit, most kids would rather take a bite out of a yummy cupcake than a hard-boiled egg.
5th grade
Activity
See this activity in a set: In the Air
We enable strictly necessary cookies to give you the best possible experience on Education.com.Cookie policy