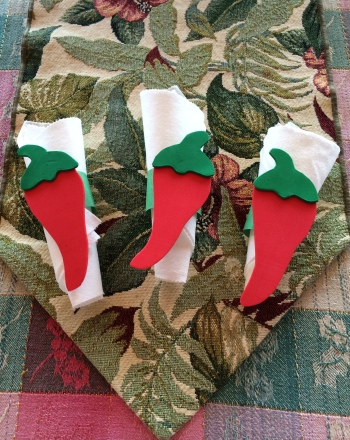 Looking for a fun way to jazz up the dining table for your Cinco de Mayo party? Let your child add her creative touch by showing her how to make chili pepper napkin rings. The cutting, wrapping, gluing and decorating provides your child with ample opportunity to develop those fine motor skills.

What makes chili peppers hot? It’s capsaicin, which is insoluble in water; that is why drinking water doesn’t get rid of the burn when you eat a hot chili pepper. The best thing to do to put that fire out on your tongue is to consume dairy – drink milk or eat some ice cream!  The heat in chili peppers is measured in Scoville Heat Units (SHU). Mild ones like bell peppers are 0, jalapenos range from 3,000 to 6,000, and habaneros rank between 200,000 and 300,000 SHU. The hottest chili pepper in the world is said to be the Naga Jolokia, also called the Bhut Jolokia, Naga Morich or Ghost Chili and ranks between 885,000 and 1,041,427 SHU!