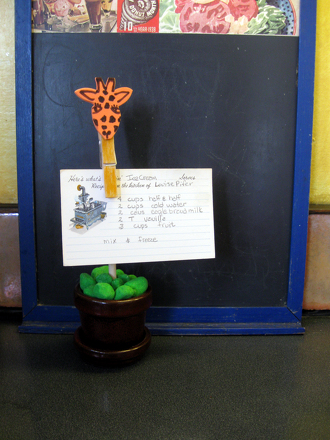 Who says the kitchen can't be fun? Ask your child to jazz up the family kitchen by creating an adorable, yet functional clothespin giraffe to sit on the counter and hold recipe cards. Your little one will be inspired to help out in the kitchen when he can read scrumptious recipes from the mouth of one of his favorite furry friends! This craft will show your child how everyday items can be reused to create new functional gizmos. As he cuts, glues, and decorates his creation, his creative energy and motor skills will be put to good use.

Your child's little creation may be just the extra incentive he needs to join you in the kitchen! Ask him to join you in making his favorite meal. The learning provided by this activity never stops as you can begin to teach him how to read recipes and valuable cooking basics.

Giraffe Craft
Activity
Giraffe Craft
Create a chunky, textured, tactile giraffe collage that is cute enough to pet! This is a great way to recycle old arts and crafts materials.
4th grade
Arts & crafts
Activity
Personalized Recipe Book
Activity
Personalized Recipe Book
Help your fourth grader make a homemade recipe book that's eye-catching, simple to construct and perfect for holding all of her favorite recipes!
4th grade
Reading & Writing
Activity
Baked French Toast Recipe
Activity
Baked French Toast Recipe
Our baked French toast recipe is particularly tasty on a chilly winter morning. Make our baked French toast recipe with your child to teach them about measuring.
4th grade
Activity
Create a Christmas Wreath Salad
Activity
Create a Christmas Wreath Salad
You can use this recipe for Christmas dinner or lunch, or for meals leading up to the holiday. This Christmas Wreath Salad recipe is simple enough for preschoolers to fifth graders
preschool
Activity
Create a Lipogram
Activity
Create a Lipogram
Challenge your child to create a lipogram, or a piece of writing that omits one specific letter. This activity strengthens writing and language skills.
4th grade
Activity
Create a Contour Map
Science project
Create a Contour Map
The goal of this project is to create an exciting topographical map out of dough.
4th grade
Science project
Create a Peace Treaty
Activity
Create a Peace Treaty
In this activity, students will create a peace treaty as a class and come up with guidelines for how they will manage conflict.
4th grade
Activity
Spider Pencil Holder
Activity
Spider Pencil Holder
This spider loves school supplies and will do a great job guarding them.
4th grade
Arts & crafts
Activity
Create a Sandwich
Worksheet
Create a Sandwich
This menu needs a new sandwich item. Can you come up with a delicious and innovative concoction?
4th grade
Reading & Writing
Worksheet
Everyday Darwin: Create a Nature Journal
Activity
Everyday Darwin: Create a Nature Journal
In this outdoor science activity you'll find tips on how to create a nature journal by choosing a native plant or animal and tracking that species.
5th grade
Reading & Writing
Activity
Create a Valentine's Day Photo Frame Luminary!
Activity
Create a Valentine's Day Photo Frame Luminary!
If there's a special person in your fourth grader's life, show him how to create this beautiful photo frame luminary as an extra special Valentine's Day gift!
4th grade
Arts & crafts
Activity
A Recipe for Transition Use
Worksheet
A Recipe for Transition Use
...Want a recipe for helping students use transition words in their sentences? This worksheet will do it!...
4th grade
Reading & Writing
Worksheet
We enable strictly necessary cookies to give you the best possible experience on Education.com.Cookie policy