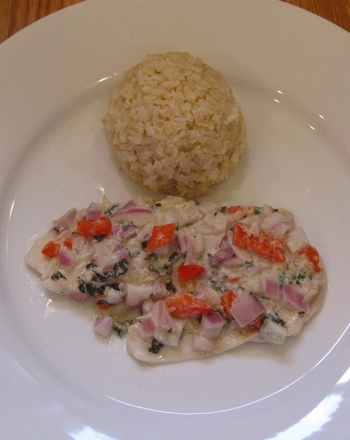 Turn plain rice into a fragrant and fancy side dish that goes great with so many things, such as this simple Gluten Free Chicken Tikka Masala! Coconut rice is popular in many countries around the world and it is often paired with traditional main dishes. This recipe activity is a fun way for younger children to get comfortable cooking in the kitchen and start practicing with basic measurements and cooking skills. What's more, delicious, healthy and gluten free!

Crazy for coconuts: The coconut comes from the coconut palm and for centuries, people have used its nutritious water, oil, milk and meat. The word coconut comes from the Spanish word coco which means “monkey face.” Early explorers named it so because they saw a resemblance to a monkey’s face in the three round indentations or “eyes” found at the base of the coconut. On the Nicobar Islands of the Indian Ocean, coconuts were used as currency until the early 20th century. Pacific Islanders regard coconuts as a cure all for illnesses. It is so highly valued as a food source and medicine that they call the coconut palm “The Tree of Life.”