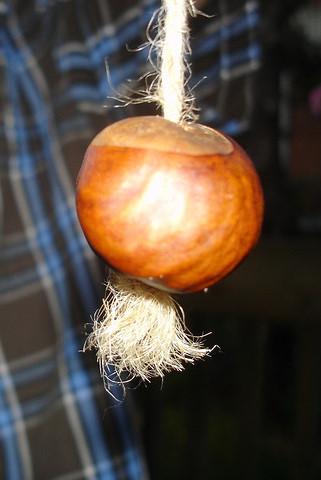 Horse chestnuts are inedible, but British children found a fun use for them around the 1840s by turning them into a game called Conkers. Serious conkers players dry their conkers for as long as a year, soak them in vinegar, or bake them-whatever it takes to make the hardest, strongest conker. Don't get too attached, though, because your opponent's goal is to destroy it!

The Midnight Ride Game
Worksheet
The Midnight Ride Game
Outrun the British in this race across the Massachusetts countryside that's based on the ride that sparked the American Revolution.
5th grade
Social studies
Worksheet
Periodic Table Game
Worksheet
Periodic Table Game
Play a fun game that combines the periodic table with a classic concentration game.
5th grade
Science
Worksheet
Blarney: A Game of Deception
Worksheet
Blarney: A Game of Deception
In Blarney: A Game of Deception, children learn about the legend of the Blarney Stone, along with the rules for a fun game where they must decide which player is lying!
4th grade
Reading & Writing
Worksheet
Metaphor Game
Worksheet
Metaphor Game
This printable game is a walk in the park! Get fired up for figurative language with this fun and creative metaphor game.
5th grade
Reading & Writing
Worksheet
Match Animal Adaptation: A Card Game
Activity
Match Animal Adaptation: A Card Game
In this game, players will learn interesting facts about animal adaption and practice them using a fun matching card game!
5th grade
Science
Activity
A Spelling Game
Activity
A Spelling Game
Here's a spelling game that gets the whole family involved!
5th grade
Reading & Writing
Activity
Add a Vowel Word Game
Worksheet
Add a Vowel Word Game
Start with a word (like "cat") and add a vowel (like "o") to make a new word (like "coat") in this cool word game.
5th grade
Worksheet
Revolutionary War Game
Activity
Revolutionary War Game
Be active while learning about American history with this twist on the classic running game "Capture the Flag."
5th grade
Activity
Snag a Spoon! A Math Game
Activity
Snag a Spoon! A Math Game
In this version of the classic card game, students will gain an understanding of equivalents and may not even realize it's a math review!
5th grade
Activity
Create a Truths and Lies Math Game
Worksheet
Create a Truths and Lies Math Game
Children use their creativity and critical thinking skills to create a truths and lies math game, based on the ice-breaker game "two truths and a lie."
5th grade
Math
Worksheet
Exponents Game
Activity
Exponents Game
Fortunately this game provides plenty of multiplication practice for your math student!
5th grade
Activity
Human Knot Game
Activity
Human Knot Game
The human knot game is a perfect team-building exercise and a fun activity that's sure to bring lots of laughs along the way.
5th grade
Activity
We enable strictly necessary cookies to give you the best possible experience on Education.com.Cookie policy